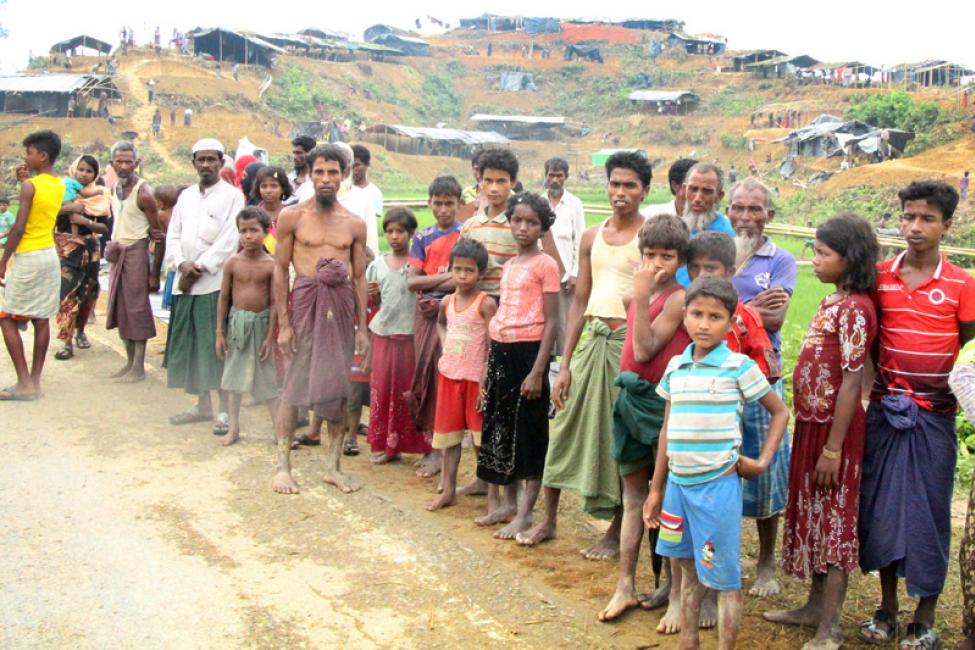 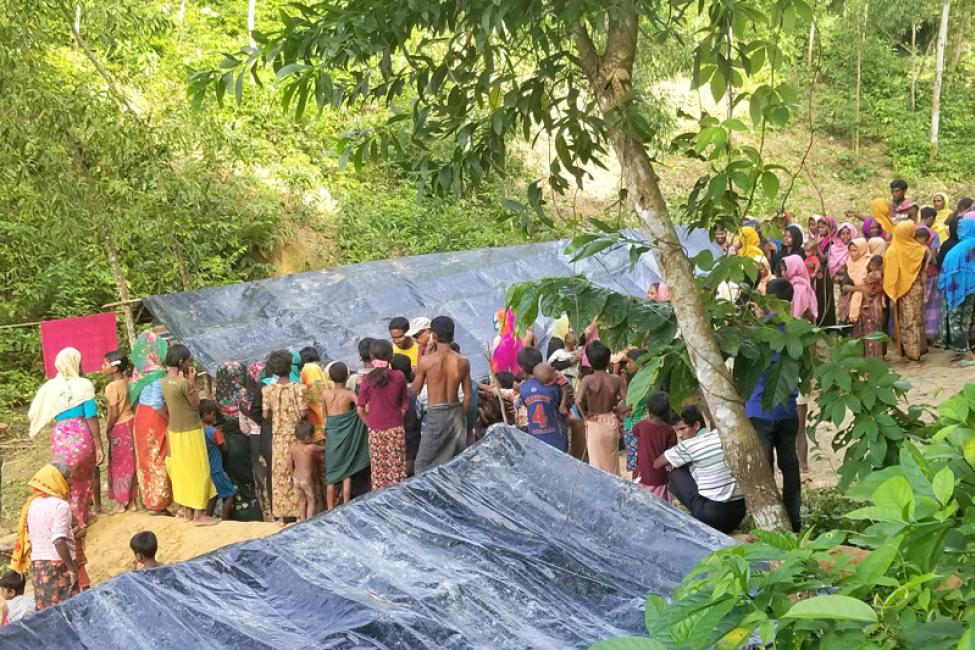 Cox's Bazar - IOM, the UN Migration Agency yesterday highlighted the need for a coordinated humanitarian response to the massive inflow of destitute people fleeing Myanmar and arriving in Cox’s Bazar. Estimated new arrivals have reached 391,000 and there is no sign of the flow of people drying up, as smoke from burning villages in Myanmar’s North Rakhine State remains clearly visible from the Cox’s Bazar district.

Thousands of the new arrivals are now walking north along clogged roads towards a 1,500-acre settlement site demarcated by the Government. Located between two of the biggest makeshift settlements of Kutupalong and Balukhali, the site will help aid agencies to access over 200,000 new arrivals currently camping or living in the open on waste ground, hillsides or by the side of the road.

In these so-called spontaneous settlements, people who arrive from Myanmar exhausted, hungry and often traumatized by the violence that they have seen, are living in terrible conditions, often with no shelter, no food, and no access to clean water or basic services.

“To respond to this inflow, which is unprecedented in terms of speed and numbers, we need to ensure a coordinated response among the growing number of agencies bringing lifesaving aid to the thousands of people flooding into Cox’s Bazar," said Mohammed Abdiker, IOM Director of Operations and Emergencies. "In order to help the most vulnerable, we have to identify who needs what where, and which agency can provide it. This is critical if we are to get help to the people who need it most, as fast as possible.”

IOM hosts the Inter Sector Coordination Group (ISCG), which publishes a daily report summarizing the emergency response in sectors including shelter and essential non-food items; water, sanitation and hygiene; health; safety, dignity and human rights; education; and nutrition. Each sector is led by an operational aid agency, which coordinates the work of other agencies active in the sector. They in turn feed data back to the ISCG coordination unit, which uses it to map the emergency and identify resources, needs and agencies that can meet them.

The Government of Bangladesh, foreign governments, including Turkey, Indonesia and Malaysia, and aid agencies on the ground are now racing against the clock to bring in the lifesaving food, shelter, water, sanitation, health and other services that the new arrivals need.

ISCG agencies operating in Cox’s Bazar have appealed for USD 77.1 million to fund the emergency response through year end (ISCG Preliminary Response Plan). Several agencies, including IOM, have committed funding from their emergency reserves. The UN’s Central Emergency Response Fund, the European Commission and the United Kingdom have also made funding commitments but agencies face a huge funding shortfall. This is likely to increase as people continue to arrive from Myanmar.

As part of the overall ISCG appeal, IOM launched a Flash Appeal, covering the next three months, of USD 26.1 million to meet the immediate needs of the newly arrived people. The appeal includes USD 100,000 for the coordination of the response.

Within the framework of Bangladesh’s National Strategy on Myanmar Refugees and Undocumented Myanmar Nationals (UMNs) in Bangladesh, IOM has been coordinating the humanitarian assistance to people who have crossed in Bangladesh from Myanmar and vulnerable host communities in Cox's Bazar since 2014. Prior to the latest influx, IOM Bangladesh was coordinating humanitarian assistance to some 200,000 living in makeshift settlements and host communities in Cox’s Bazar. Lifesaving services delivered by IOM and its partner agencies include clean water and sanitation, shelter, food security, health care, education, and psychosocial support for the most vulnerable individuals, many whom are suffering from acute mental trauma or are survivors of sexual violence.