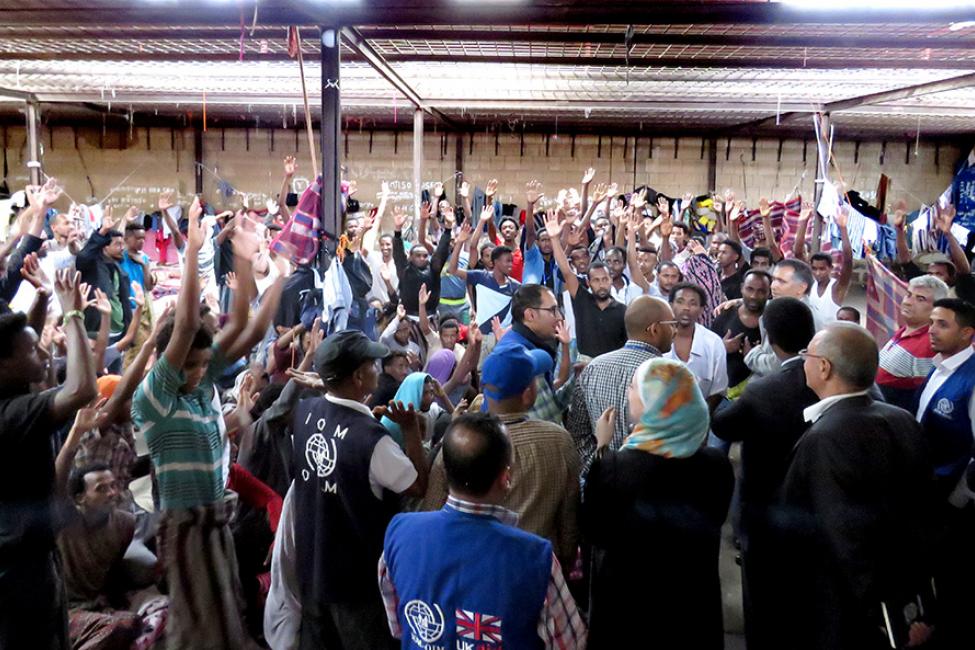 When asked if they wanted to go back to Ethiopia immediately, all the migrants raised their hands. Photo: Saba Malme/IOM 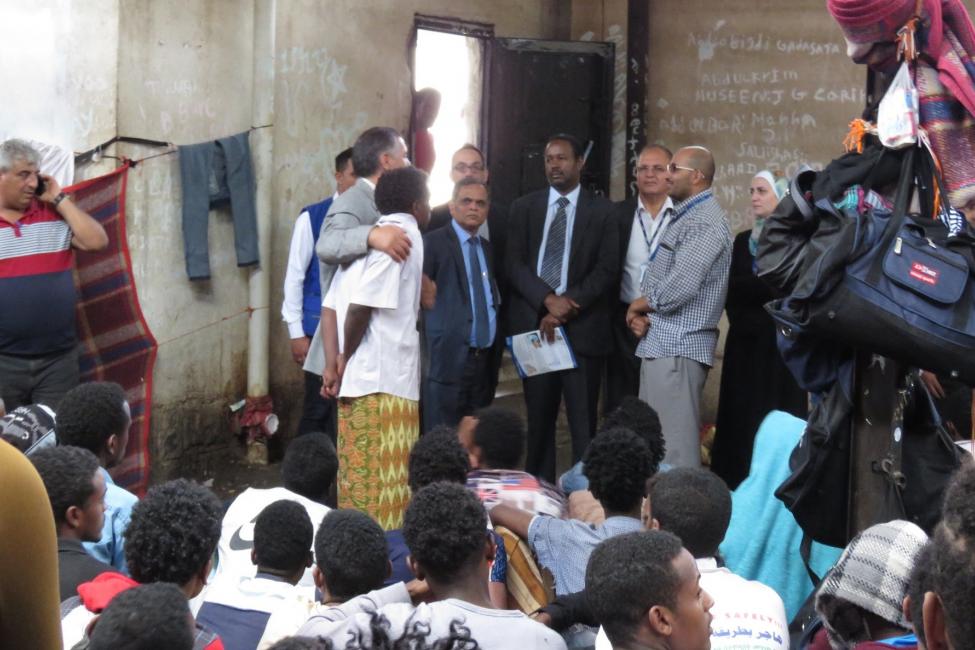 Mohammed Abdiker (r) and next to him, Sarat Dash (l) IOM Yemen Chief of Mission (both wearing ties) listen to migrants in Sana’a, Yemen. Photo: IOM 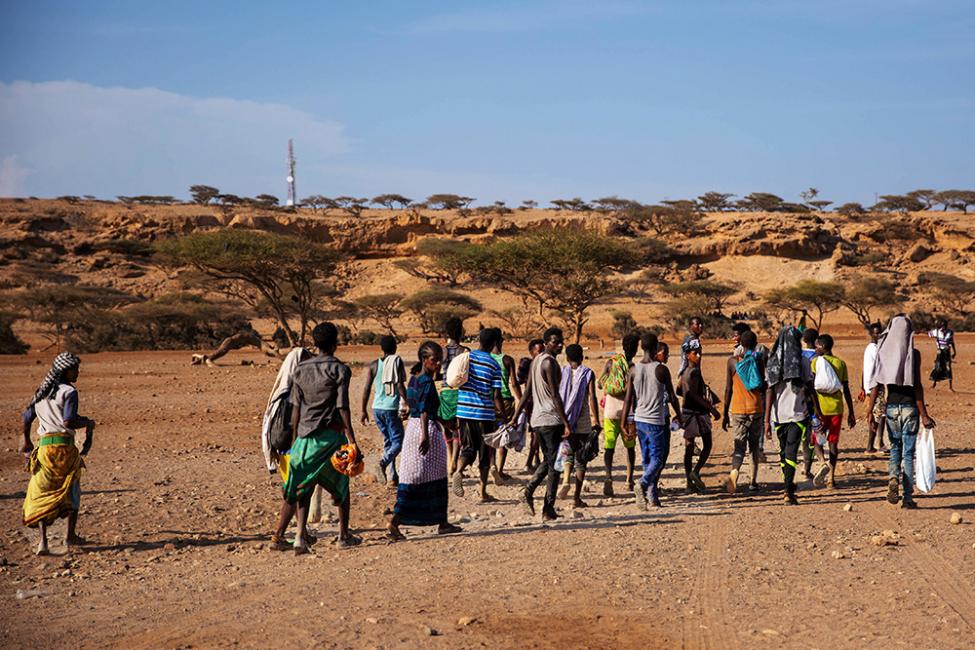 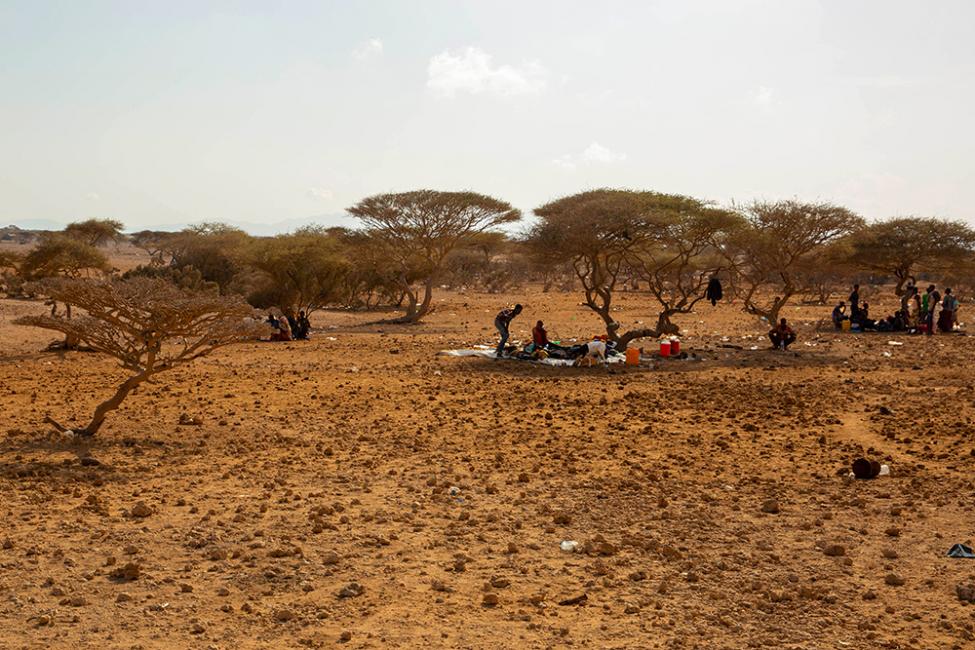 Sana'a – Following a visit to Yemen this week (02-06/05) Mohammed Abdiker, Director of Operations and Emergencies at IOM, the UN Migration Agency, said that he is "extremely concerned about the appalling and inhumane situation migrants are facing in Yemen" and called for "greater support and protection both from the international community and authorities in-country."

“Last August, it shocked the world when scores of Ethiopian and Somali teenagers dreaming of a better life were forced into the sea by smugglers off the coast of Yemen and drowned,” Abdiker said as he left Yemen on Sunday (06/05). “This shock never translated into greater protection for other youth, who also have nothing but the hope of opportunity far from their rural homes and can only afford and access a deadly migration route through a conflict-zone.”

It is estimated that some 7,000 migrants enter Yemen each month with the total number of migrant arrivals in 2017 reaching near 100,000. The vast majority intends to reach the Gulf countries, in particular the Kingdom of Saudi Arabia (KSA).

Migrants often leave their homes on foot and walk through Djibouti. From there, they take boats across the Gulf of Aden to the Aden, Lahj, Shabwah, and Hadramout Governorates in Yemen and then attempt to head north to the KSA border. Some work irregularly, for example on qat farms in Yemen, to make money to fund the rest of their journey. At various stages on the route, they enlist the aid of smugglers, especially to make the sea journey or to cross the KSA border. The total number of migrants currently in Yemen is unknown.

Both en route and once in Yemen, many migrants suffer at the hands of cruel smugglers and other criminals, including physical and sexual abuse, torture for ransom, arbitrary detention for long periods of time, forced labour for no pay and even death.

“I met teenagers in utter distress from what they had experienced already in their young lives,” Abdiker explained. “They are just a commodity to smugglers – something to make quick and easy money from and, if they die, the smugglers do not care as there are thousands of other people willing to pay for their services and risk their lives to simply build their parents a house, put their brother through school, or for any opportunity at all.”

Some migrants also get caught up in the conflict, sustaining injuries or dying from shelling, and some are taken to detention centres.  “Without prosecuting those preying on these vulnerable young people, any humanitarian assistance we provide will forever be a band aid – of course, it will save lives, but we owe those who have suffered more than that,” Abdiker said.

"The recent Human Rights Watch and Vice News Reports showed how horrendously many migrants being held in Yemen's detention centres are treated. We welcome the closure of the Centre highlighted in that report and the prosecution of those who committed crimes against migrants. However, we know that this was not an isolated incident and so we call on all those with migrants in their custody in Yemen to treat them with dignity and compassion,” Abdiker continued.

“Although no migrant should be held in detention, especially children, but while they do exist, IOM advocates for their closure and also offers its support to the authorities to improve the condition in these detention centres for migrants. We currently have access to three detention centres, where we provide humanitarian aid and offer safe passage home in a dignified manner from this conflict zone for those who want to go back. For children, we provide family tracing assistance to eventually reunite them with their loved ones, provided it is safe to do so.”

While in Yemen, Abdiker visited a migrant holding facility in Sana’a run by the Immigration, Passport, and Naturalization Authority (IPNA) – where IOM is providing life-saving assistance to hundreds of migrants.

That assistance, carried out in cooperation with the authorities, focuses on food distribution, health care, water, sanitation and hygiene, and psychosocial support. Some 97 per cent of the detainees are Ethiopian and the total group includes ten girls, 12 boys, 20 women and 227 men. IOM is working to help the majority of them return home.

Since Abdiker's visit, some 200 migrants were brought to the IPNA facility, bringing the total number of people held there close to 470. These 200 people were part of a group of approximately 1,200 migrants, who were taken into the authorities' custody a few days ago. Abdiker also expressed his concern for the other one thousand migrants, specifically in relation to where they will be held and how they will be treated.

During his visit, Abdiker met with various concerned authorities and thanked them for their agreement to support IOM to improve the situation of migrants in Yemen.

"Yemen is experiencing the worst humanitarian crisis in the world; it is obviously not a safe route for migrants, nor is it safe for Yemenis themselves in many areas. IOM provides humanitarian aid to displaced and conflict-affected Yemenis throughout the country,” said Abdiker.

“Our teams are seeing more and more Yemenis returning from KSA and they are in need of our support. They tell us that changes in their circumstances in KSA due to tightening regulations make them feel forced to return. Both migrants in Yemen and returning Yemenis are in desperate need of greater support from the international community, and neither group should feel forced to transit through or return to a conflict zone,” he added.