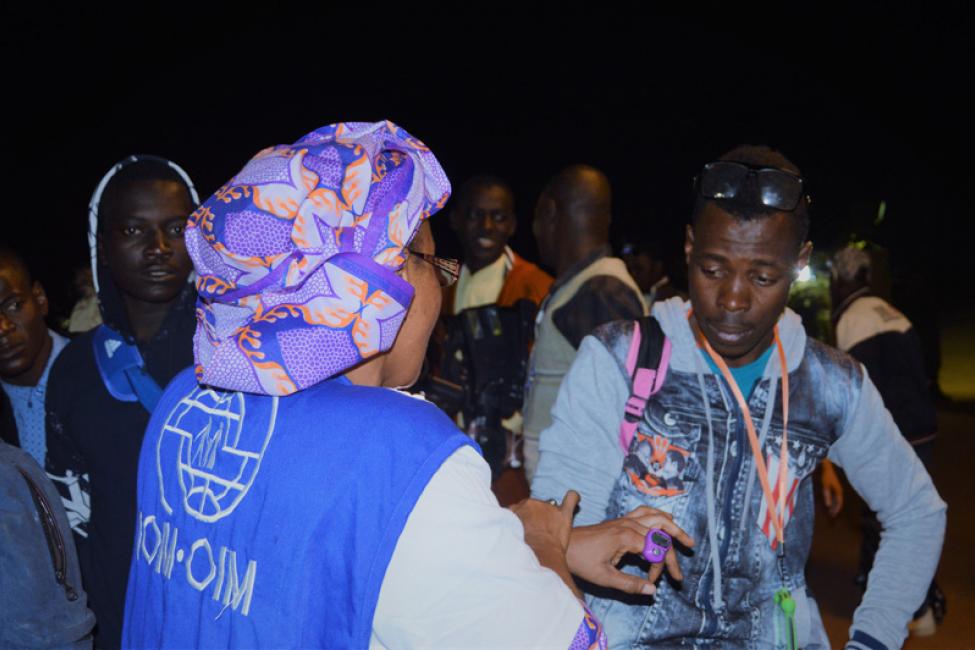 Over 500 passengers from the first of eight charter flights scheduled from Libya to Niger arrived on Wednesday 6 December. Photo: IOM 2017

Niamey – Following recent international discussions, the Government of Niger and IOM, the UN Migration Agency in Niger have begun the mass evacuation of the almost 4,000 migrants that have registered for voluntary return at the Embassy of Niger in Libya.

Organized by the Ministry of Foreign Affairs in Niger with the Niger Embassy in Tripoli, and under the initiative of President of Niger Mahamadou Issoufou and Prime Minister Brigi Rafini, the evacuations officially began this week (06/12) with the arrival of the first of eight charter flights carrying 504 migrants, including women and young children at the Diori Hamani International Airport in Niamey.

IOM is providing technical and logistic support for the registration, profiling, reception and onward transportation of the returning migrants, under the Migrant Resource and Response Mechanism (MRRM) financed by the European Union.

The migrants were received by the Ministers of Interior, Foreign Affairs, Health and Humanitarian Action, more than 50 IOM staff and other senior officials.

IOM staff from operations, protection, medical, logistics, finance, information management, reintegration, community stabilization and communication units were at the airport to welcome, register, profile, provide food and water and facilitate the transportation of the returnees to their villages of origin.

IOM and the Government of Niger are also exploring possibilities for the socio-economic reintegration of migrants arriving in the following weeks.

After the successful reception of the first charter last night, the Minister of Foreign Affairs of Niger officially confirmed the plans for seven additional charters carrying 500 migrants each, one per day, from Wednesday (06/12) onwards, to transport the total 3,850 Nigerien migrants now registered in Tripoli.

Mohamed Bazoum, Niger’s Minister of Interior praised in his speech the fruitful partnership with IOM, and complimented the Organization for making possible the dignified return of Nigerien migrants under the best possible conditions.

The success of the operation is a stepping stone in strengthening the partnership between IOM and the Government of Niger.

“After the discussions at the [AU-EU] summit in Abidjan, the government has demonstrated its commitment to making this evacuation a priority and a reality,” declared Alberto Preato, IOM’s MRRM Programme Manager. “The success of the operation is a stepping stone in strengthening the partnership between IOM and the Government of Niger. IOM is proud to be part of this operation and to be able to bring back hope to those who had long lost it,” he added.

The teams left the airport early next morning ensuring all 504 returning migrants were on their way home. IOM staff is fully prepared to welcome the second charter due today (08/12). Moreover, in close collaboration with IOM staff in Libya, the mission in Niger is preparing to receive additional groups of migrants now in detention centres across Libya.

Meanwhile, IOM staff in Agadez are now assisting the 10th convoy of migrants arriving from Algeria as they prepare themselves for possible mass evacuations of stranded migrants from its northern borders.