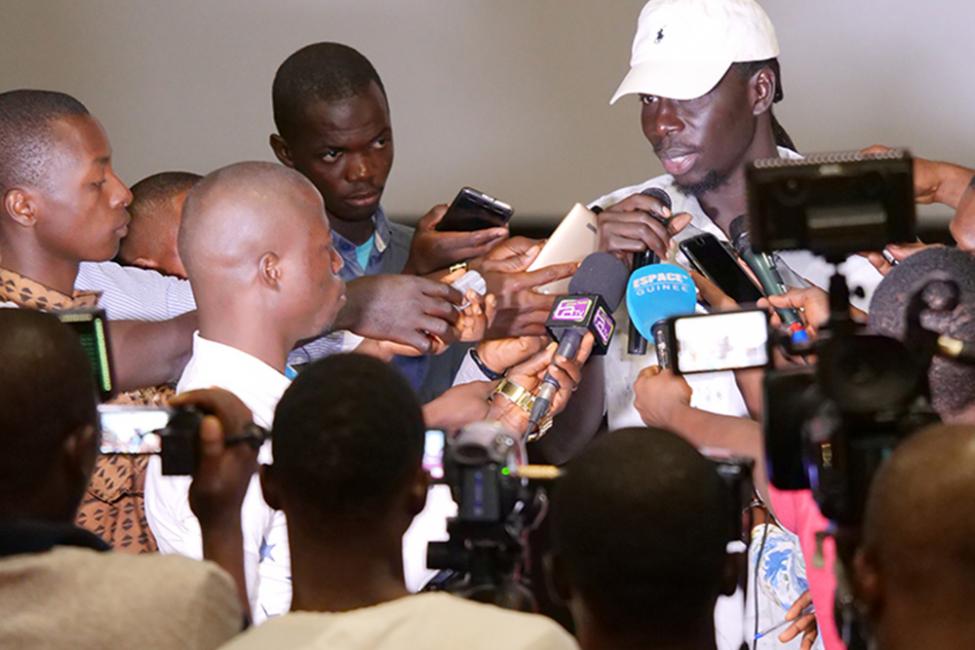 Ablaye Mbaye, one of the singers at the launch of the video clip, explains the importance of raising awareness of Guinean youth on the risks of irregular migration. © IOM

Conakry – IOM, the UN Migration Agency, in partnership with Guinean rap group Degg J Force 3 today (16/02) released a song titled Falé (the ‘Bridge’ in the local Susu language) to raise awareness among Guinean youth of the risks of irregular migration. A tour will start on 18 February in the regions of Mamou, Boké and Conakry, which are the major migrant-sending areas in the country.

Sung in French, Susu and Pulaar – three most widely spoken languages in Guinea – and with a video subtitled in French, English and Arabic, Falé tells the story of two young Guinean men who decide to leave their families and make the perilous journey through the desert. The lyrics describe the hardships faced by thousands of young migrants who choose to cross the desert in search of a better future for themselves and their families.

In 2017 alone, 6,604 Guinean migrants reached the Italian coast, mostly via Libya, making Guinea the second-most represented country (behind Nigeria) when considering all sea arrivals from Africa. The lack of perspective, high unemployment rate and stories of Guineans who found success in reaching Europe all have had an impact on the decisions of thousands to try the journey.

“We need a change of mentality among the youth,” said Ablaye Mbaye, one of the singers at the launch of the video clip. “We have to stress that they can do anything and succeed at home.”

“Obviously, the story told is a fiction but it reflects the reality experienced by many young Guineans,” said IOM Guinea Chief of Mission Fatou Diallo Ndiaye. “The tour that will start soon will also be a way to reach the younger population in high migration-affected areas.”

IOM Guinea, through a call for proposals launched in September 2017, wished to partner with popular music groups for the awareness-raising component of the project Strengthening Migration Governance and Support for The Reintegration of Migrants in the Republic Of Guinea.

This national project is part of the EU-IOM Joint initiative for Migrant Protection and Reintegration launched in April 2017 for duration of three years. The project covers six administrative regions of Guinea: Conakry, Boké, Mamou, Labé, Kankan and N'Zérékoré.