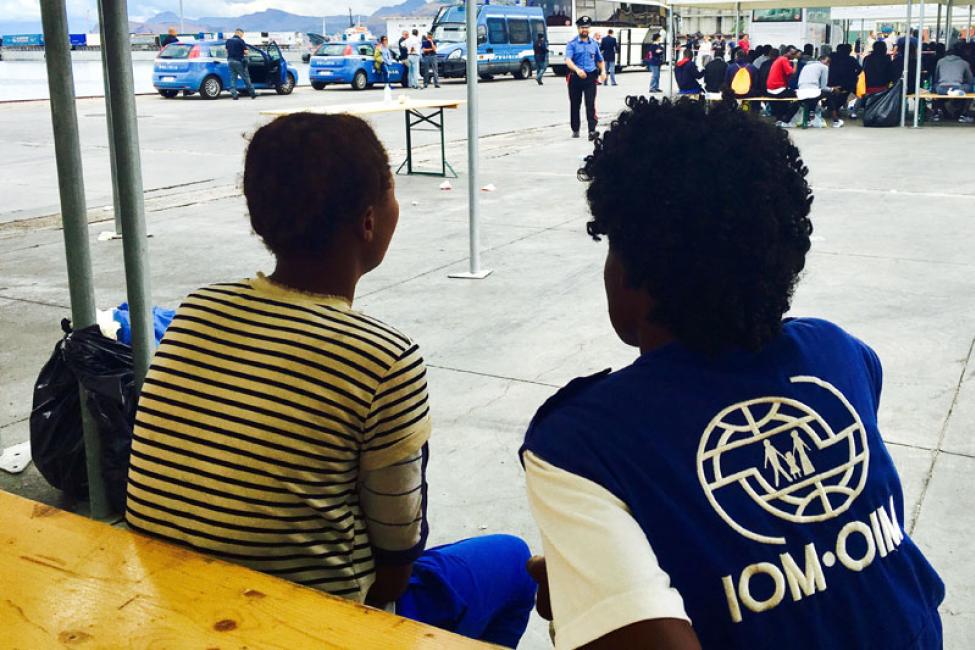 Rome — Over the past three years, IOM Italy has seen an almost 600 per cent increase in the number of potential sex trafficking victims arriving in Italy by sea. This upward trend has continued during the first six months of 2017, with most victims arriving from Nigeria.

This is one of the key findings of a new report published by IOM, the UN Migration Agency, Human Trafficking through the Central Mediterranean Route, which was released in Italian this week (21 July) by IOM’s Coordination Office for the Mediterranean in Rome. An English version will be available soon.

Among other findings, the report states that sexual exploitation increasingly involves younger girls – often minors – who are already subject to violence and abuse on their way to Europe. IOM estimates that 80 per cent of girls arriving from Nigeria – whose numbers have soared from 1,454 in 2014 to 11,009 in 2016 – are potential victims of trafficking for sexual exploitation.

The report is based on data collected by IOM at landing sites and in reception centres for migrants in the regions of southern Italy, where the Organization carries out identification of potential victims and assists those who, once identified, decide to escape their exploiters and accept IOM support.

"Trafficking is a transnational crime that devastates the lives of thousands of people and is the cause of untold suffering," said Federico Soda, Director of the IOM Coordinating Office for the Mediterranean. "This is a theme we have been working on for years, committing to protect, prevent and collaborate with the authorities dealing with organized crime."

IOM Project Manager Carlotta Santarossa added: "The report describes the organization's activities in the face of this phenomenon: the difficulties in protecting victims and the main vulnerabilities identified among several cases of people who were assisted by the Organization. We also wanted to tell some of the stories of people who have been assisted by IOM staff to highlight the true nature of this painful and hateful form of slavery. We also feel that it is increasingly urgent that data analysis be accompanied by an examination of the market these girls supply, and the growing demand for paid sexual services." IOM staff working in Sicily and elsewhere meet potential trafficking victims as soon as they reach Italian soil. This allows IOM to develop a list of indicators that are useful in the identification of potential trafficking victims amongst the newly arrived migrants, using indicators based on information collected during individual and group meetings with migrants. These indicators are broadly described in the report, accompanied by some of the stories that have been collected by IOM staff during their activities.

Among the more significant indicators:

Other indicators of trafficking emerge during in-depth individual talks; for example, some migrants claim that they have not paid anything for the journey because someone else paid for their movements. When IOM staff identify a potential trafficking victim, they explain to them that it is possible to access certain protection mechanisms and, with the victim’s consent, the Organization’s staff report the victim on the anti-trafficking toll-free number. If the person agrees, IOM staff also provide assistance in communicating and filing a report to the investigating authorities.

Activities in the field demonstrate that most trafficking victims are not willing, at least at first, to reveal their experience or to take advantage of security programmes provided by IOM and local institutions. There are many reasons for this including links between trafficking victims and traffickers, the control that the accompanying person (for instance, madame or boga) has over the victims, or the belief that victims cannot violate an oath sealed with a voodoo ritual or a rite of initiation (the victim is committed to honouring her agreement). Finally, there is a sense of responsibility towards one’s family that results in a fear of retaliation by traffickers on the victim’s family members back in their country of origin.

Very often the young women whom IOM staff meet have been victims of sexual violence during their journey; they have experienced serious trauma and suffer from psychological distress.

For more information on the report, please go to http://www.italy.iom.int/sites/default/files/news-documents/RAPPORTO_OIM_Vittime_di_tratta_0.pdf