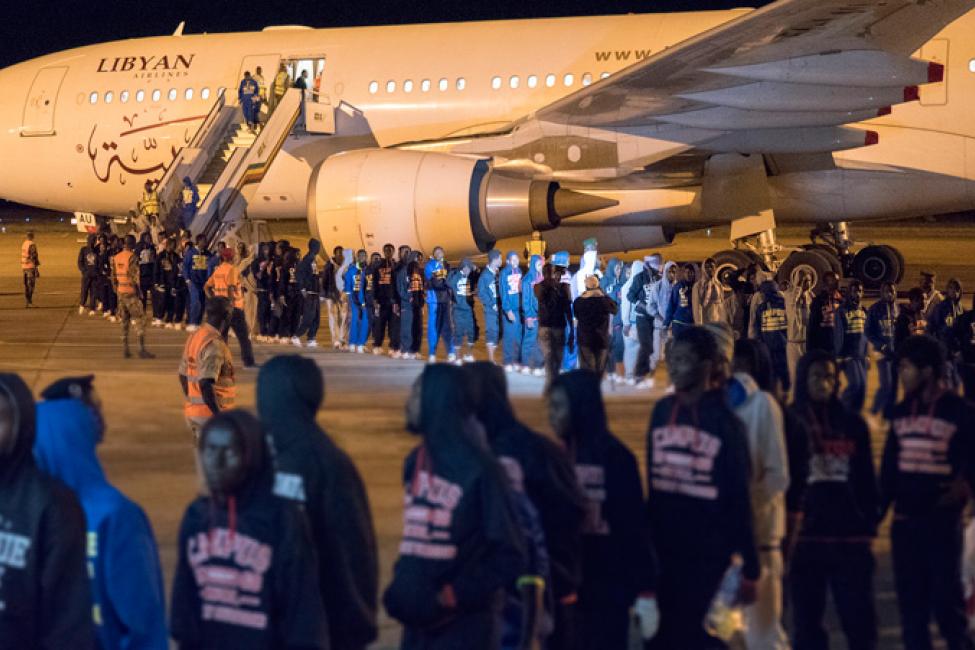 Conakry - IOM, the UN Migration Agency, recently topped 10,000 rescued migrants repatriated from Libya under IOM’s Voluntary Humanitarian Return programme. Since March 2015, when the return programme was launched, returns have taken place to 30 different countries with a total of 13,530 men, women and children returning home to their families.

It was around 2:30 am on Wednesday (08/11) when the flight chartered by IOM Libya touched down at Conakry-Gbessia International airport. Onboard were 243 Guinean migrants, including eight unaccompanied children and 10 women – one with four children.

Among the returnees, too, was a medical case that was directly transported to the hospital for medical follow up. This was the second November flight from Libya; on 1 November, 247 Guinean migrants returned to Conakry.

As with all charters of this type, IOM conducted pre-departure interviews, medical examinations and facilitated the acquisition of travel documents and issuance of exit visas for all passengers. The migrants of this flight were registered in Trig al Matar and Tajoura Detention Centres in the Tripoli region.

On hand to welcome them at the airport were the different teams comprising Government and non-Government officials: SENAH (National Service of Humanitarian Affairs), representatives of the Ministry of Guineans Abroad and the Ministry of Social actions, IOM, and the Guinean Red Cross.

Upon arrival at the Conakry airport, the returning migrants were provided with on-the-spot assistance which included the provision of food and water, as well as non-food items by IOM Guinea. The migrants were then registered and the questionnaires used will enable IOM to better understand the profile of the returnees, to learn more about the reasons of their departure, their migratory path and their living conditions in Libya to ensure the proper alignment of activities relating to their reintegration into their various communities.

Returning migrants residing in Conakry were able to return directly to their homes, while others from different parts of Guinea were accommodated for one night by SENAH at the Matam Transit Centre, from where they will be able to proceed to their final destinations.

After this registration exercise, IOM provided each migrant with the local equivalent of EUR 50 to take care of their immediate needs (including transport). Within the next three months, and as part of the programme Strengthening Governance of Migration and Supporting the Sustainable Reintegration of Migrants in the Republic of Guinea derived from the initiative of the European Union Trust Fund (EUTF), IOM will be assessing the returnees' situations on a case by case basis to help them find alternatives to ensure their sustainable reintegration in Guinea.

At the same time, IOM provides continuous psycho-social support to vulnerable migrants and, where necessary, any added support designed to address their immediate needs.

Seydou*, one of the returnees from N'zérékoré (in Forest Guinea Region), arrived with a hand injury, explaining that he was held by bandits in a private prison in Sabratha on the Libyan coast, west of Tripoli. When the camp was raided by government forces, he fled not knowing who was attacking. He fell, and a piece of wood perforated his hand.

After the transfer of liberated migrants to centres administered by the Libyan state in Tripoli, IOM cared for Seydou and took him to a hospital for surgery. Today he is recovering, thankful to be back in Guinea.

This latest flight was the ninth organized by IOM for Guinean migrants from Libya since early 2017. It adds to the returns from other countries (Benin, Cameroon, Egypt, Morocco and Niger, amongst others).

In total, since January this year, 2,682 Guinean migrants have returned to Guinea with IOM support. One hundred and thirty-five were children.

Strengthening the Governance of Migration and Supporting the Reintegration of Migrants in the Republic of Guinea is a joint initiative between IOM and the European Union Trust Fund (EUTF). Launched in April 2017, it will be implemented over a period of three years and will cover six administrative regions of Guinea: Conakry, Boké, Mamou, Labé, Kankan and N'zérékoré.

As part of this project, IOM Guinea will assist returning migrants (depending on their profiles and needs), to create small businesses, to involve them in a collective and/or community entrepreneurial initiative or to enroll them into professional training programmes.

*The names of migrants have been changed to protect their privacy.