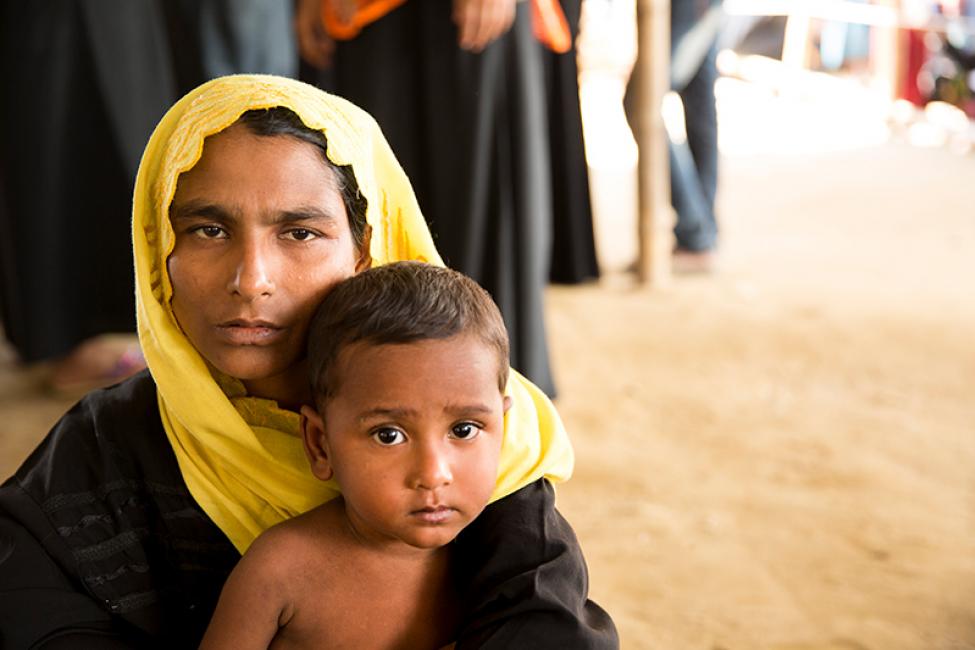 A woman waits to receive humanitarian aid with her child, having arrived in the Rohingya refugee settlement only moments before. Photo: Olivia Headon/IOM 2017 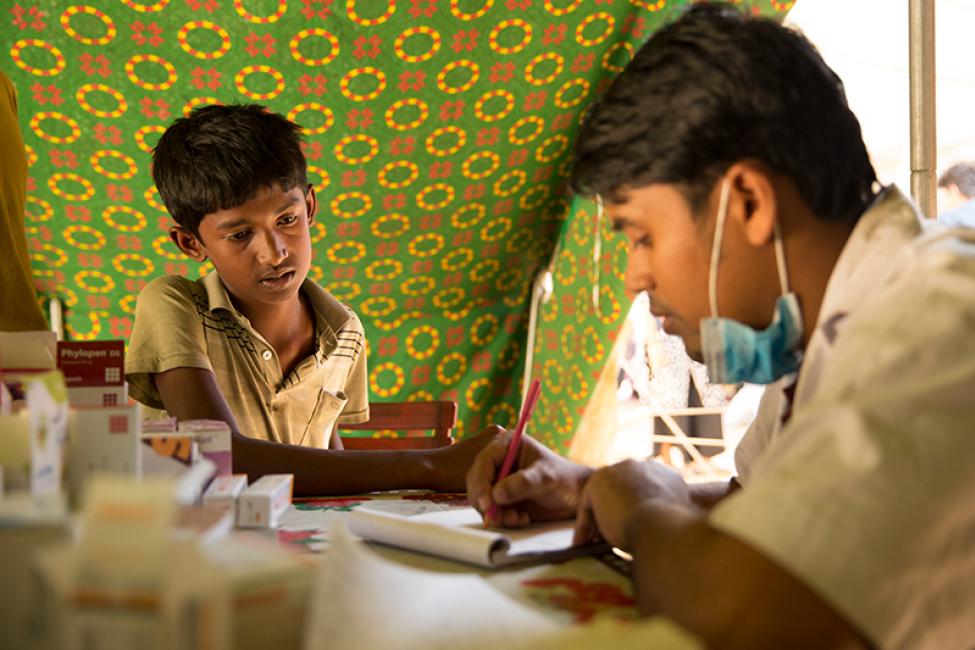 Cox’s Bazar – In just three months an estimated 624,251 Rohingya refugees have crossed into Cox’s Bazar, Bangladesh, fleeing violence and oppression in Myanmar’s Northern Rakhine State. Of these, over 1,800 have arrived in the past seven days. This brings the total population of Rohingya seeking safety in the district to over 836,000.

“Although the number of people arriving is far lower than the first few weeks of the crisis, hundreds of refugees continue to cross the border into Bangladesh from Myanmar daily,” said Andrew Lind, the UN Migration Agency (IOM)’s Emergency Coordinator in Cox’s Bazar. “People are still arriving in the settlements with horrifying accounts of physical and sexual abuse, harassment and murder. All of them fear for family members left behind in Myanmar,” he added.

A 30-year-old woman, who spoke to IOM on Monday (27/10), as she arrived in Balukhali settlement with her five children, said that she fled her village when it was burned to ground just seven days ago. She said that the people attacking the village were divided into two groups: one, which kidnapped people, and a second, which set villagers’ houses alight. “I saw them kidnap people with my own eyes, but I did not see where they took them,” she said.

After two days hiding in a nearby village, fearing further attacks in the area, she started to make her way to the border with her children. She told IOM that her husband had died several months earlier because they had no access to healthcare in Rakhine State.

For days, her two older sons carried the two youngest children, while their mother carried the fifth child and what little she had managed to salvage from their home. She told IOM that her four-year-old son now refuses to eat and keeps talking about how they are going to be attacked again. “There is no peace. We cannot sleep... If we are not safe, we will not go back,” she said.

Like the other refugees, the family arrived with almost nothing in a sprawling, congested settlement, where the humanitarian community’s response is still trying to catch up with the vast needs of a desperate population.

Water, sanitation and hygiene (WASH) are of particular concern. The World Health Organization (WHO) found that over 60 per cent of water sources tested in the settlements were contaminated with E.coli. Much of the contamination is a result of shallow wells located less than 30 feet away from latrines. Full latrines, and lack of space to desludge them, are also contributing to the potentially life-threatening problem.

In the past week, IOM has drilled thirteen deep tube wells in Zone SS, a less congested area in Balukhali settlement, where people arriving over the last two weeks have settled. In total, IOM has now drilled 374 deep tube wells and installed 4,973 latrines (permanent and emergency) in the Cox’s Bazar settlements and in host communities.

Meanwhile, Pope Francis, who is currently in Myanmar, has condemned politicians who propagate alarm over immigration and argued their fear-mongering engenders violence and racism.

Writing in a message titled Migrants and Refugees: Men and Women in Search of Peace which the Vatican sent to heads of state and government before his trip, the pontiff said, “Those who, for what may be political reasons, foment fear of migrants instead of building peace are sowing violence, racial discrimination and xenophobia, which are matters of great worry for all those concerned about the safety of every human being.”

After Myanmar, Pope Francis will travel to Bangladesh where he is expected to meet a small group of Rohingya refugees.