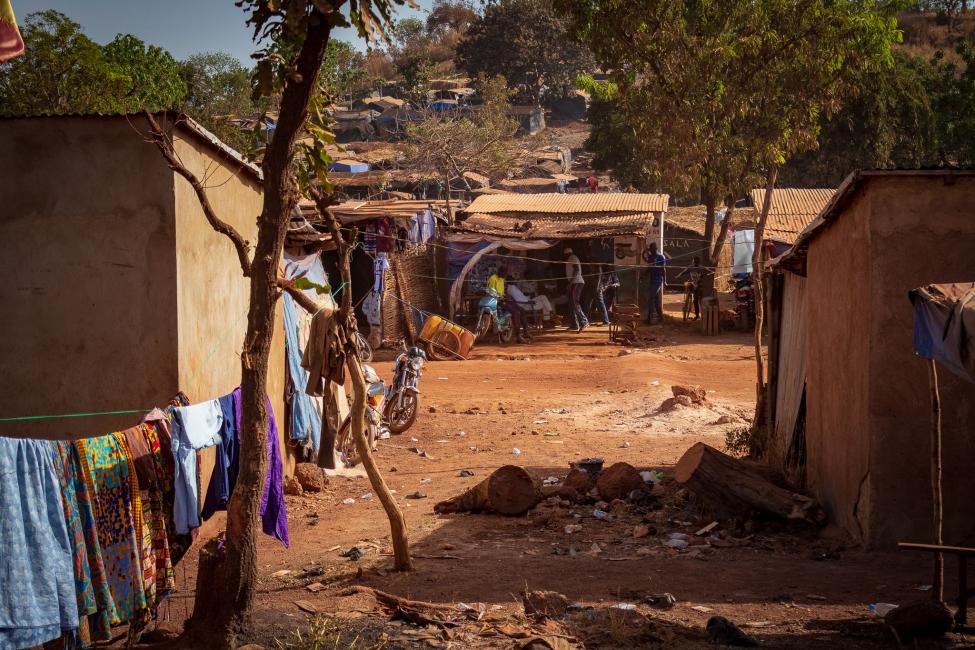 Bamako – Gold is Mali’s top export, accounting for at least 60 per cent of the country’s total exports in 2017 and making Mali the third gold exporter in Africa, just after South Africa and Ghana. Small-scale, informal and low-tech mining also known as artisanal mining, although largely unregulated, accounts for at least one third of Mali’s total gold production.

Every year, the sector which has seen an increase in activity since the start of the crisis in 2012, attracts thousands of men and boys from across the region, creating a demand for sex workers to satisfy the needs of those who spend months, sometimes years away from their spouses who stayed back home.

And every year, girls and women like Loveth are trafficked from neighbouring countries primarily for prostitution and sexual slavery.

In a corner of her shack made of black canvas, wood and corrugated iron, ogbonno soup, a traditional Nigerian dish simmers in a steel pot. When she does not work, Loveth likes to cook her mother’s recipes. A native of Edo State in Nigeria, Loveth now lives more than 2,000 kilometres away, in Koflatiè, a shantytown located in a mining area, in Southwestern Mali. She left Nigeria in 2017 in search of a better opportunity.

“In Nigeria, I was approached by a woman who offered to take me to Mali. She told me I would get a job. But I did not know this is what I was getting into,” Loveth explains.

“When I arrived in Mali, the madam [procuress] took my passport away and asked me to pay her one million CFA [USD 2,000] to get it back and the only way to pay her back was prostitution. I refused because of my son,” she says. John* (name changed), Loveth’s one-year-old son, had joined her on the dangerous journey to Mali.

What happened next, is what happened to an estimated 20,000 Nigerian girls and women in Mali according to Nigeria’s National Agency for the Prohibition of Trafficking in Persons (NAPTIP). When she exhausted her savings, Loveth had no other option than to prostitute herself to get the ransom money.

“I managed to pay half of the money before I escaped,” she adds. Loveth did not collect her passport when she ran away from the madam.

Today, she works as a waitress in a bar owned by a Nigerian survivor of human trafficking who established herself in the surroundings of Koflatiè. She hopes to return home to start over but wishes to stay in Mali for the moment.

Loveth is among thousands of Nigerian girls vulnerable to human trafficking and sexual exploitation around Mali’s artisanal gold mining areas. First-hand accounts from IOM staff who met them reveal that many of them are underage and were deceived into travelling to Mali either through false promises of a regular job, or the conviction that they were heading to Europe.

Bondage is a common method used by traffickers to coerce their victims and exercise control over them. As in Loveth’s case it can be debt bondage, but it can also be the confiscation of travel documents or voodoo cursing or in this case, victims of trafficking are coerced into signing a moral contract with the traffickers who finance their journey.

The contract is sealed by a spiritual priest or ‘native doctor’ to whom they promise never to denounce their traffickers to the police, to obey their ‘madam’ and to fully pay their debt. The victims thus live in constant fear of reprisals, including their death or that of their family, if they fail. For those arriving in Italy, their debt can reach EUR 50,000.

The trend of trafficking of girls from Nigeria for sexual exploitation is captured in IOM’s latest reports on human trafficking along the Central Mediterranean Route.

This year, to fill in the lack of data on the exploitation of migrants in mines, IOM is conducting a study on Migration Towards Artisanal Mining Sites in Mali and in other West African countries, funded by the UK’s Department for International Development (DFID). The findings will help IOM better understand the migratory dynamics in relation to gold mining activities in the region and provide stakeholders with evidence-based research to inform their policies, strategies and responses.