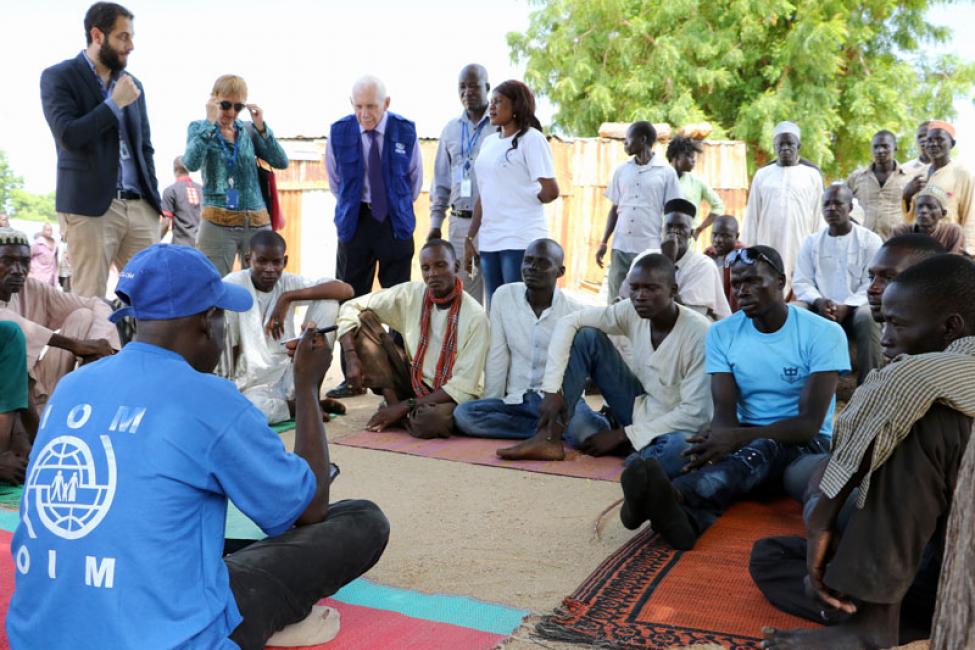 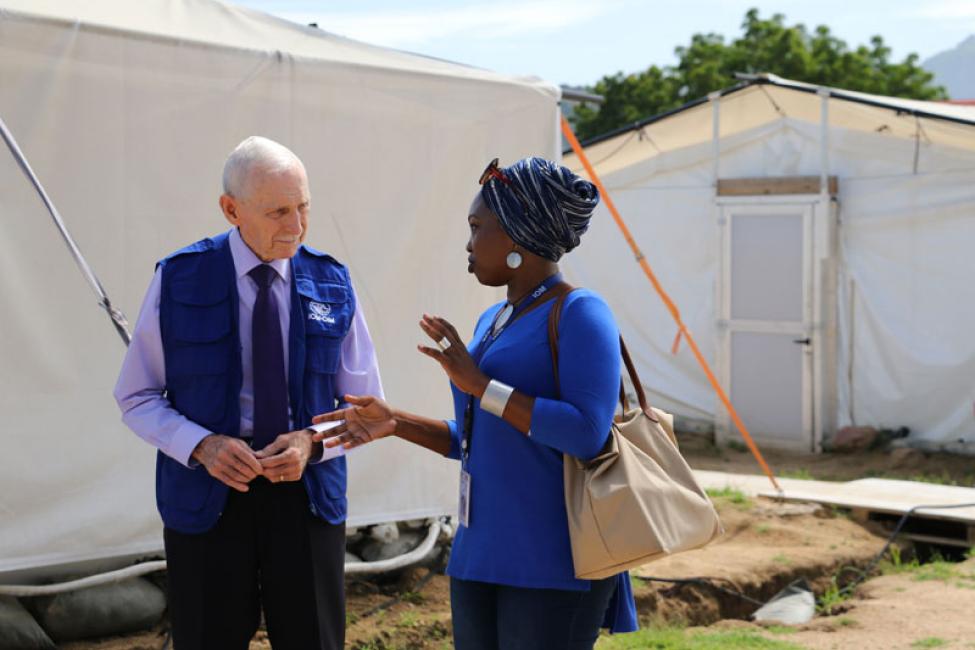 Borno – Nearly two million people fled their homes to escape Boko Haram in northeast Nigeria; more than half of the displaced are children and 133,000 are infants. IOM Director General William Lacy Swing spent three days meeting with some of the internally displaced at camps and in communities in the hardest hit areas of Borno state, the epicentre of the conflict, now in its eighth year.

Ambassador Swing travelled to Nigeria’s northeast on 28 July, following meetings with the Nigerian government in the capital city, Abuja. He joined some of IOM Nigeria’s staff in the conflict zone, where IOM, the UN Migration Agency has a team of about 530 people working across the six states most affected by the conflict.

IOM’s emergency response is based in Maiduguri, the capital of Borno and the birthplace of Boko Haram.

“I’m very grateful to have had this opportunity to see first-hand one of the biggest humanitarian emergencies of our time,” he added.

Although Nigeria hosts most of the conflict’s internally displaced people, and has been the centre of Boko Haram’s violence with countless abductions, rapes and forced recruitment, the conflict has also spilled into the neighbouring countries of Niger, Chad and Cameroon, pushing more than 440,000 others out of their homes, IOM reported in December 2016.

“This crisis is competing with about eight others, including that of Syria, Yemen and South Sudan, for the world’s attention,” DG Swing lamented.

And it’s far from solved.

It’s been three years since Yagana Hamed, her husband and their five children, including three-year-old twin boys, left late one night from their home in Monguno, 140km north of Maiduguri, to escape Boko Haram.

“Boko Haram was nearby so we had to run,” she explained from the small plot of land where she and other displaced people are squatting in straw shelters in Maiduguri. “Our twins were newborns. We couldn’t carry anything, not even clothing, when we left.”

It’s the rainy season in northeast Nigeria. Torrential rain, strong wind and sandstorms descend on the region regularly. Hand-woven shelters made of sticks or straw are no match. Yagana and her family lost their shelter – about six square feet – two days ago. They’ve been sleeping outside under an awning built by humanitarian workers.

“My daughter’s eyes have turned pink. I’m not sure what is wrong with her,” the mother said of the sick nine-year-old. Her children attend Koranic school in the afternoon, but have not studied anywhere else since they fled their home in 2014.

Many makeshift shelters that aren’t flattened by storms are flooded. Bamala Mustafa, whose family of five lives in a stick shelter nearby, holds a bowl of water to show what fell during the last rain, forcing his neighbours out of their spaces.

IOM has built tarpaulin shelters for nearly 11,000 families, about 102,000 people in Borno state. A few hundred other households were given shelter kits to expand or repair their spaces in Adamawa, the other state devastated by the conflict.

Still, 8.5 million people need life-saving assistance in northeast Nigeria this year, according to the United Nations.

In Bama, eastern Borno, Ambassador Swing met some of the people in desperate need of shelter. The militarized displacement camp in Borno’s second largest city, reduced to a ghost town because of continuous insecurity, hosts about 13,000 people; roughly one-third of them received shelters from IOM, the others from various humanitarian partners.

About 1,500 Nigerian refugees who had sought safety in Cameroon returned to Bama recently. Most of them are children and nearly all are still waiting for shelter from humanitarian actors in an under-funded crisis; USD 672 million (more than two-thirds of the required support) is not secured for the humanitarian response this year, according to UN OCHA.

For now, they sleep outside, unprotected from heavy rain, floods and malaria.

Nigerians remain resilient and entrepreneurial, DG Swing observed. “There’s a long way to go, but I’m mostly impressed by the courage and the resilience, and the patience of these hardworking people. They want to go back to work.”

Ambassador Swing saw many displaced adults sewing and making pasta as part of IOM’s mental health and psychosocial support programme, which brings people together to work, talk and heal. The programme gathers displaced people who have had similar experiences, such as young women who escaped Boko Haram’s captivity, widows or men who witnessed killings. Many women lost their husbands to the armed group and do not have time for counselling so IOM staff bring support to them while they work.

Falamata, 24, is one of many displaced people who have joined IOM as a way of supporting their communities. She has been trained to provide counselling and group support as part of the programme that has helped more than 300,000 people since starting in Chibok, Nigeria, in 2014. She uses her salary to buy beads for other displaced women so they can start small businesses, selling jewelry in the camp.

“I didn’t even know any English before,” said Musa Mohammed at one of IOM’s camp community centres in Maiduguri, where the Director General visited on 30 July. “Now I can read all these sentences. I’ve really learned a lot,” he shared, smiling towards the whiteboard riddled with grammar lessons. His family of seven has lived in an IOM tarpaulin shelter for the last three years. Musa hopes his new skills will help him get better work, maybe even in teaching, if he is able to return home to Kukawa, near Lake Chad in northern Nigeria, once security improves.

“They want to go back home and I think with our support, we will realize that objective,” Ambassador Swing said. The director general met with the deputy governor of Borno state to discuss IOM’s plans to continue the emergency response by providing more critical shelter and household items, like mattresses, blankets, kitchen utensils and water purification tablets to displaced families. IOM also helps manage camps and tracks displacement with the organization’s flagship Displacement Tracking Matrix, to guide the wider humanitarian community.

They also discussed IOM’s increasing focus on livelihood interventions for displaced Nigerians, such as sewing, knitting and barbershop work.

The lack of work opportunities has been devastating to Nigerians in the south, too, as the West African country suffers an economic recession.

Nigerians are the most common nationality arriving in Italy by the Mediterranean Sea. Although trafficking and smuggling is rampant in the region, most travel to find work in Europe. About 37,000 Nigerians arrived in Italy by sea last year and more than 9,000 so far this year, IOM reports. More than 2,000 migrants have died on the precarious Central Mediterranean route they follow from Libya to Italy, in 2017.

“Irregular migration is a global challenge, but it’s also a national challenge,” the minister noted. “I want to thank IOM for helping repatriate so many of our migrants from Libya.”

“The idea is not to stop migrants. It’s about trying to save lives by counselling them about the risks of putting their lives in the hands of a smuggler,” DG Swing said, explaining that IOM opened a migrant information office in Agadez, Niger, last year to try to engage migrants heading north from Nigeria, and around the region, to Libya and the Mediterranean Sea on the dangers many face.

IOM has helped more than 1,800 Nigerians return home safely from Libya this year through the organization’s Assisted Voluntary Return and Reintegration programme. DG Swing will be in Libya in early August to continue advocacy around the issues migrants, particularly Nigerians, face in the North African country.