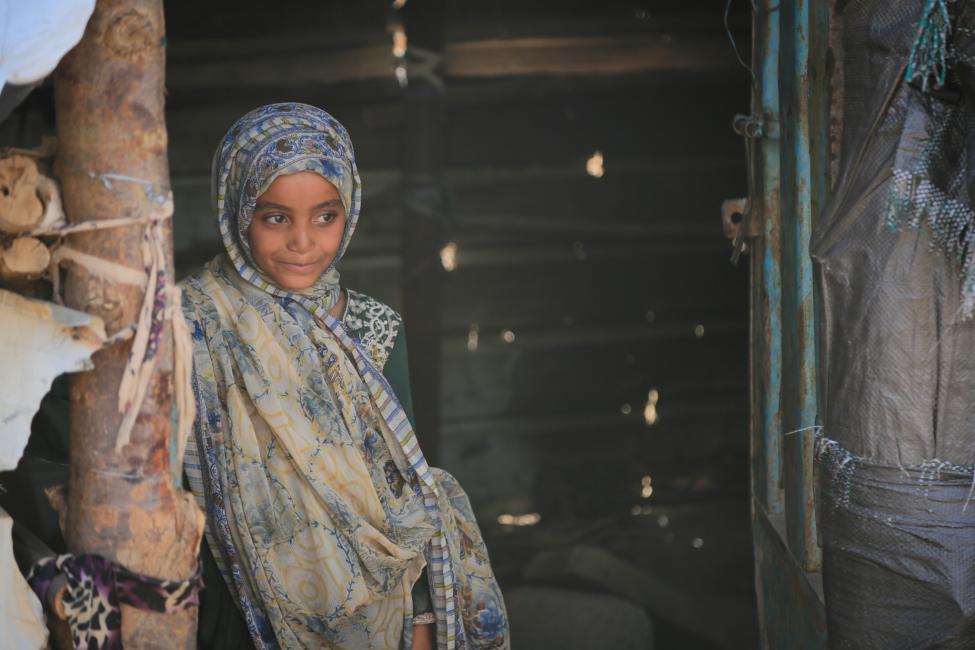 A displaced girl stands at the door to her shelter in Ma’rib, the governorate hosting the largest number of displaced people in Yemen. Photo: IOM 2020

Aden – As the conflict in Yemen enters its seventh year, the crisis remains the largest in the world and continues to put millions of lives at risk. The International Organization for Migration (IOM) launched today an appeal to assist over 5 million people affected by the Yemen crisis in conjunction with the Yemen Virtual High-Level Pledging Conference.

With over 10,500 people recently fleeing areas in Ma’rib, where fighting has intensified in the last few weeks, IOM will dedicate at least a third of its requested funds to life-saving assistance for displaced people, migrants and local communities affected by the Ma’rib crisis.

In a situation characterized by escalating conflict and displacement, a declining economy and the breakdown of public institutions, it is projected that people in Yemen will experience alarming levels of acute malnutrition and food insecurity throughout this year. Today, governments from around the world will come together to reaffirm their commitment to Yemen and pledge financial contributions to the humanitarian response.

“IOM, alongside our humanitarian partners, is concerned about the serious impact that prolonged funding shortages will have on the ability of displaced people, migrants and other vulnerable populations to survive the looming famine, ongoing pandemic and escalating conflict,” said António Vitorino, the IOM Director General at the Pledging Conference, which is co-hosted by the Governments of Sweden and Switzerland.

“The already staggering needs in Yemen have been compounded by the threat of a second wave of COVID-19 and the re-escalation of conflict in Ma’rib, which has led to the displacement of the most vulnerable families,” added Vitorino.

The UN estimates that roughly four million people are currently displaced in Yemen and most displaced people do not have enough access to safe shelter, clean water or health care.

A large portion of the displaced are living in Ma’rib governorate, where the recent escalations in hostilities are mostly impacting those already living in displacement. At least three displacement sites have been emptied after being directly impacted by the fighting and a majority of families are becoming displaced for the third time or more.

“UN data for 2021 shows record levels of acute food insecurity, raising major concerns on the impact of hunger on particularly vulnerable groups, especially internally displaced people and migrants, many of whom remain stranded in Yemen with little access to assistance or resources,” added Vitorino.

Despite the reduction in numbers of migrants arriving in Yemen in 2020 — down to over 37,500 from 138,000 in 2019 — the dangers faced by migrants have increased. Thousands of migrants are stranded across the country, unable to continue their journeys or return home. Most are sleeping rough on the streets with virtually no access to clean water, food or health care. They also face the risk of abuse, exploitation and detention.

In 2020, IOM scaled up assistance to stranded migrants in Yemen, while advocating for the resumption of its Voluntary Humanitarian Return programme to Ethiopia, as an immediate life-saving measure.

“With over 24 million people still in need of some form of assistance, greater resources are required to respond effectively to growing and complex needs. Funding shortages had real consequences in 2020, which were particularly hard felt in cities like Aden and Ma’rib which host thousands of migrants and displaced people in dire need of support and with already limited access to services,” said Vitorino.

“While an immediate humanitarian response remains critical in Yemen, IOM continues to advocate for a lasting peaceful resolution to the conflict. This is most urgent in Ma’rib governorate, where fighting continues to worsen needs on the ground, putting the lives of hundreds of thousands of people at heightened risk,” Vitorino concluded.

IOM is appealing for USD 170 million to support more than 5.1 million people across the country, including displaced people, migrants and the communities that host them, by the end of 2021. IOM’s activities are being implemented in the following sectors: health, water, sanitation and hygiene (WASH), shelter and non-food items (S-NFIs), camp coordination and camp management (CCCM), transition and recovery, protection, migrant assistance as well as coordination and safety (IOM’s Displacement Tracking Matrix) and common humanitarian services (humanitarian hub).

To watch IOM's Director General intervention on the High-Level Pledging Conference for the Humanitarian Crisis in Yemen, click here.

IOM’s Global Crisis Response Platform provides an overview of IOM’s planned activities and funding requirements to respond to the evolving needs and aspirations of those impacted by, or at risk of, crisis and displacement in 2021 and beyond. The Platform will be regularly updated with new Crisis Response Plans published over the coming weeks.