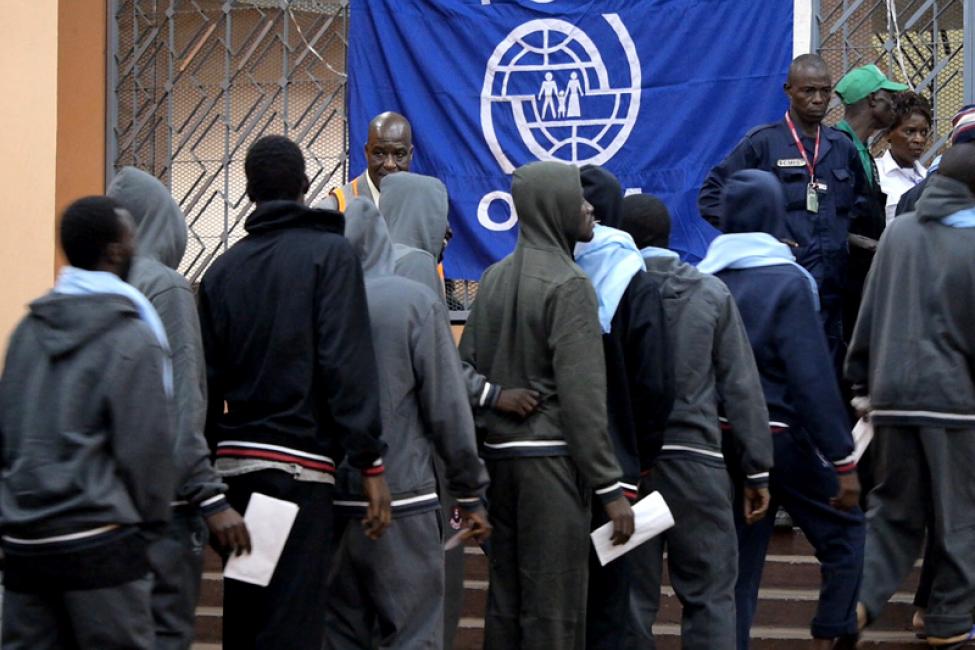 Conakry – IOM, the UN Migration Agency this week (05/09) assisted 132 Guinean migrants to return home from Libya. The migrants, including 10 women, 1 infant, 2 children and 1 unaccompanied child, had requested assistance from IOM to return voluntarily to Guinea after living in Libya as irregular migrants in often daunting circumstances.

IOM Libya and the Embassy of Guinea in Tripoli assisted the migrants in obtaining the required travel documents for the voluntary assisted humanitarian return. Before the charter flight flew out of Mitiga airport in Tripoli, the IOM team in Libya conducted pre-departure interviews, medical examinations and facilitated the issuance of exit visas for all passengers. Migrants also received additional assistance in the form of clothing, footwear and other essentials.

The group also included two patients who received medical assistance from the Red Cross upon arrival at Conakry prior to being handed over to the Ministry of Social Affairs who transferred them by ambulance to a special unit prepared for returning migrants at the John Paul II clinic.

The migrants were met at Conakry-Gbessia Airport by teams from IOM Guinea, SENAH (National Service for Humanitarian Actions), the Red Cross, representatives of the Ministry in charge of Guineans Living Abroad and the Ministry of Social Affairs. They were accommodated by IOM Guinea, which gave each migrant a kit containing toiletries and food. The migrants were then registered and profiled. The data from this exercise is expected to provide IOM with deeper insight into the profile of irregular migrants, why they left their country, their migratory pathway and living conditions in Libya.

The more vulnerable in the group were provided with immediate psycho-social support by IOM, the Ministry of Social Affairs and the Red Cross. Where needed, additional assistance will be provided to address their immediate needs.

The migrants will be provided with access to reintegration support within three months of their return. This support is part of the project, Enhancement of Migration Governance and Support for the Sustainable Reintegration of Migrants in the Republic of Guinea funded by the European Union Trust Fund.

Some of the returning migrants spoke to IOM staff.

Habib*, a carpenter, said he had worked for more than three years in Tripoli. Everything was going well for him when in 2016, he asked his wife Mariam* to join him. After the birth of their baby, they decided to go home as business was becoming very difficult for him.

Djibril*, who had worked as an accountant in Guinea, lost his job in 2014 when the country was affected by the Ebola virus epidemic. He then chose to go to Europe with his younger brother. They were arrested and imprisoned soon after their arrival in Libya. Although relieved to be back home, Djibril is distressed that his brother is still detained in Libya. He showed IOM staff a wound in his shoulder, which he says was inflicted by caused by a guard with a knife, testifying of the much-documented difficult conditions in Libyan detention centers.

This week’s flight from Libya was the seventh since January 2017 organized by IOM for Guinean migrants from Libya with a total of 859 migrants assisted so far. This adds to other Guinean returnees from Benin, Cameroon, Egypt, Morocco and Niger who decided to return home.

Between 1 January and 28 August 2017, IOM Libya helped repatriate 6,946 stranded migrants (18 per cent of them women) back to their countries of origin. Three-quarters of this population were held in detention centers and 3,473 were eligible for reintegration assistance.

Launched in April 2017, Enhancement of Migration Governance and Support for the Sustainable Reintegration of Migrants in the Republic of Guinea is a joint initiative between the European Union Trust Fund and IOM which is being implemented over a three-year period and covers six administrative regions of Guinea, namely: Conakry, Boké, Mamou, Labé, Kankan and N’Zérékoré.

“Under the project, IOM Guinea supports returning migrants, depending on their profiles and needs, by facilitating the creation of a small business, involving them in a collective and/or community business initiative, or providing them with vocational training.

*The names of the migrants have been changed to protect their privacy.