Migrants Warned of Dangers of Land Mines on the Balkan Route 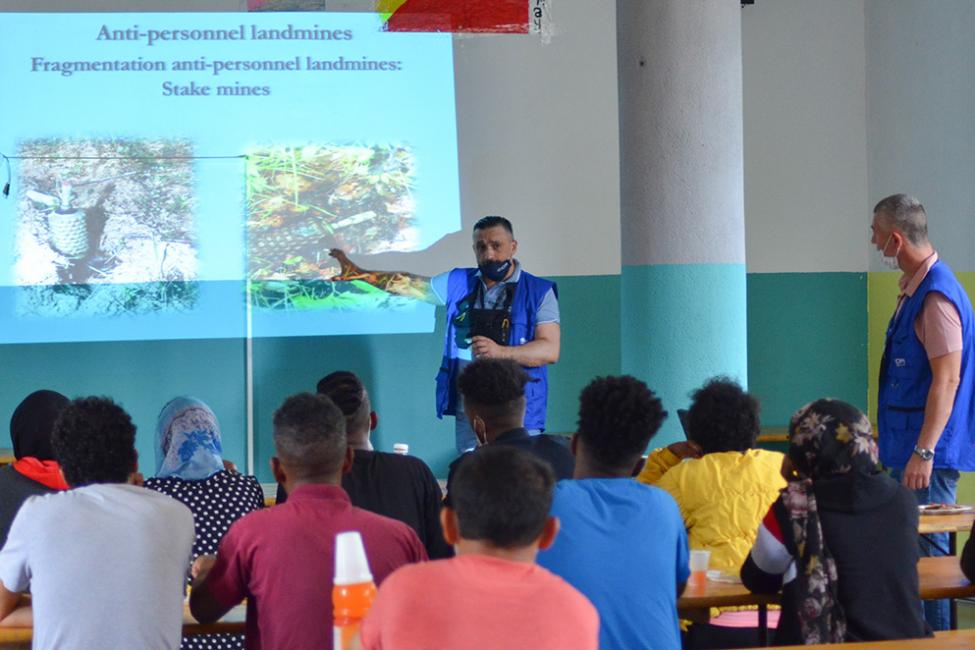 IOM trainers informing migrants and staff on how to spot land mines.

Sarajevo – Migrants attempting to cross into Western Europe via the so-called Balkan route face several risks including drowning, abuse, exploitation and gender-based violence. Added to that is the risk posed by land mines.

The Bosnia and Herzegovina Mine Action Centre estimates that there are 180,000 unexploded mines left over from the wars of the 1990s. Over 130,000 have been removed, and 617 lives have been lost. A migrant died in a land mine explosion over the border in Croatia earlier this year, illustrating the need for outreach on the dangers of mines.

The country has five temporary reception centres, which accommodate some 3,400 migrants from Pakistan, Bangladesh, Syria, Afghanistan, Iran, Iraq, sub-Saharan and North Africa. More than a half that number again stay outside official centres, according to data compiled by the International Organization for Migration (IOM) in the most recent IOM Displacement Tracking Matrix report.

To alert migrants and IOM Outreach staff about the danger of land mines, IOM recently concluded a series of training sessions in the temporary reception centres.

“Very few migrants know that there are land mines in Bosnia and Herzegovina and, even if they are aware, they don’t know what to look for,” said Rajko Živak, one of the certified instructors. “We have warned them to be extra careful when they pass through remote or abandoned areas.”

“We’ve shown them what mines look like, how well hidden and sneaky they can be,” added his colleague Slađan Panić. “Most importantly, we’ve stressed that mines are a permanent danger even years after they have long been forgotten about.”

All ten sessions were translated into Arabic, Urdu, Pashtu, Farsi, Dari, Bengali, and other languages spoken by the migrants.

The vision of the United Nations is a world free from the threat of mines, explosive remnants of war, cluster munitions, and improvised explosive devices, where individuals and communities live in a safe environment conducive to sustainable peace and development. No one should be left behind; the human rights and needs of victims must be met, and they should be integrated fully as equal members of their societies (United Nations Mine Action Strategy, 2019-2023).