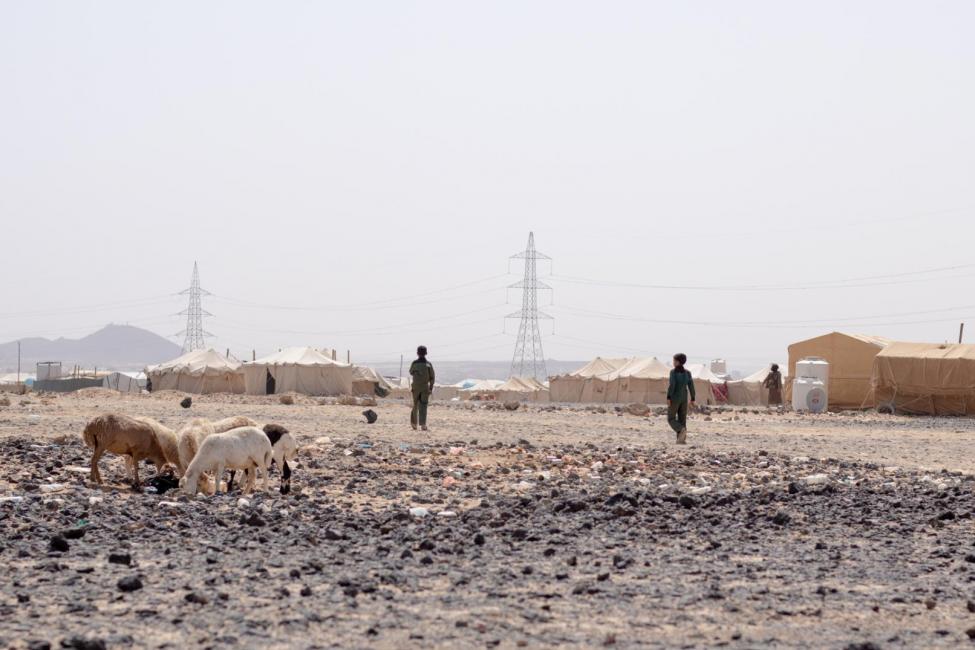 Ma’rib – An escalation of hostilities in and around Yemen's Ma’rib governorate has forced thousands of people to flee in search of safety in an alarming rise in displacement since the beginning of September.

IOM’s Displacement Tracking Matrix (DTM) – which currently has access in seven of Ma’rib’s 14 districts – recorded the displacement of close to 10,000 people last month, the highest rates recorded in Ma’rib in a single month this year.

“This renewed violence in Ma’rib is destabilizing the lives of thousands of people and leading to tragic death and injuries of civilians, including children,” said Christa Rottensteiner, IOM Yemen Chief of Mission.

“IOM calls on all parties of the conflict to respect international humanitarian law and protect civilians.”

Recent conflict has destroyed critical infrastructure such as bridges and roads.

Routes within and into Al Abdiyah district, in the south of Ma’rib, have reportedly been cut off – obstructing the movement of people and essential supplies. The district is one of the largest in the governorate, with an estimated 31,500 residents, according to local authorities.

Humanitarian organizations are concerned about the well-being of conflict-affected communities in areas where assistance cannot reach.

The situation is also dire in Harib, Al Jubah and Rahabah districts, from where nearly 4,700 internally displaced persons (IDPs) are estimated to have fled this month. The majority went to safer areas in Al Jubah and Ma’rib Al Wadi districts, and to densely populated, urban areas in Ma’rib city.

Hostilities in parts of neighbouring Shabwah also caused the displacement of hundreds within that governorate and north into Ma’rib.

Needs are drastically mounting in what the United Nations describes as the world's worst humanitarian crisis.

Many of the newly displaced live in deplorable conditions, with multiple households sheltering under one roof. More than half say shelter is their top need, followed by food and water.

"We’ve now fled for our lives for the second time," said Fatma*, a woman displaced from Harib five days ago. "We could barely afford to pay for the bus that brought us here. Twenty-two of my family members are now sharing one tent. We can't sleep and we can barely find food.”

Since January 2020, IOM and partners estimate that close to 170,000 people have been displaced towards Ma’rib city, many of them multiple times. One third have fled since the beginning of 2021.

Many have fled to the 34 displacement sites managed by IOM, exacerbating the overcrowded conditions. Others are seeking refuge in abandoned public buildings, in the homes of relatives or have depleted their savings renting accommodation.

As the largest humanitarian actor in Ma’rib, IOM teams are working tirelessly to respond rapidly to the overwhelming needs.

In the last month, IOM has provided cash assistance that has allowed nearly 3,000 people to buy food, medicine and other critical items. The organization has distributed water and provided shelter and other emergency household items to more than 1,000 people who fled with nothing.

Health teams are responding to hundreds of IDPs who have been injured or fallen sick on their journeys, providing emergency health care at mobile and static clinics.

Among those affected are also 4,000 migrants who are stranded in the governorate.

They have found themselves in the middle of the conflict and are increasingly vulnerable to exploitation and abuse. Often unable to continue their journeys, most struggle to find jobs or access food, basic health care or other services.

IOM scaled up its response to migrants in Ma’rib this year – opening a new Migrant Response Point in July where they can now receive health care, emergency items and other assistance.

IOM’s humanitarian operations in Ma’rib have reached more than 200,000 people with support from the governments of Germany, Japan, the Kingdom of Saudi Arabia and the United States, as well as EU Humanitarian Aid, the United Nations Central Emergency Relief Fund and the Yemen Humanitarian Fund.

*Name has been changed for reasons of security.