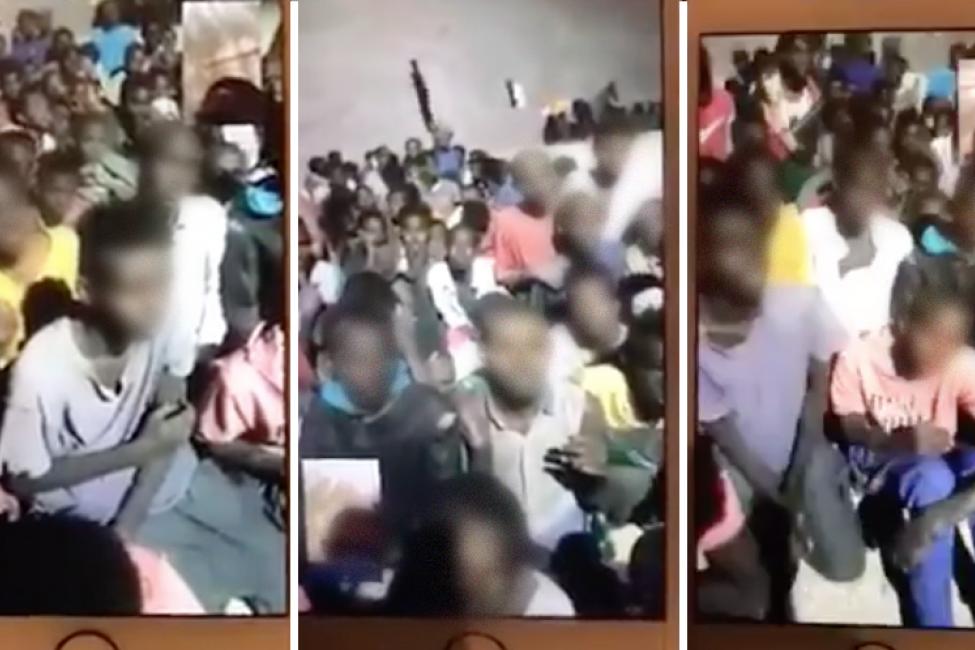 Images from the Facebook video depicting hundreds of Somali and Ethiopian migrants and refugees held against their will. Faces have been blurred to protect the people depicted.

Images from the Facebook video depicting hundreds of Somali and Ethiopian migrants and refugees held against their will. Faces have been blurred to protect the people depicted.

Libya - The UN Migration Agency (IOM), on Thursday with representatives of UNHCR briefed members of the UN’s Libya country team on the ongoing efforts to rescue what are believed to be up to 200 victims of kidnapping and torture in Libya.

The victims, whose plight came to IOM’s attention through contacts in Africa who had discovered video of the migrants in captivity via social media, are known to be Somali and Ethiopian nationals – both men and women – whose families in the Horn of Africa have received ransom demands based on short video clips depicting scenes of active torture. This tactic, which is not new, has been reported for several years across the northern Sahara region and even in parts of Latin America. IOM believes the video is authentic.

“IOM is currently working closely with all partners in trying to locate the migrants. IOM supports the Libyan efforts in the fight against the smuggling networks and we are very concerned about the current situation,” said Othman Belbeisi, IOM’s Chief of Mission in Libya.

IOM will continue to use its staff in the region – in coordination with authorities in Libya – to assist in tracing and potentially aiding in the rescue of these victims, added Belbeisi. “IOM is currently working closely with all partners in trying to locate the migrants,” he said.

In a video posted on Facebook on 9 June, hundreds of emaciated and abused Somalis and Ethiopians are seen huddled fearfully in a concrete room. Other nationalities may also be present.

Speaking on video to a Somali journalist based in Turkey (who recorded the call he received from the criminal gang), the migrants and refugees, who are sitting on the floor in a crowded space, say they have been beaten and tortured. Some report that their teeth have been removed, their arms broken and that none had been given any food. They explain that women have been isolated in separate cells.

“I have been here one year. I am beaten every day. I swear I do not eat food. My body is bruised from beating,” said one of the captives in the video. “If you have seen the life here you wouldn’t stay in this world any more. I didn't eat the last four days but the biggest problem is beating here. They don’t want to release me.”

Throughout the video there are exchanges between the journalist and the person moderating on site in Libya. In one instance, he introduces the journalist to a young visibly starving man with a large concrete block weighing down on his back, as punishment for his family not paying his ransom.

“I was asked for 8,000 US dollars,” said the young man, when asked by journalist why the criminal gang were punishing him. “They broke my teeth. They broke my hand. I have being here 11 months… This stone has been put on me for the last three days. It’s really painful.”

“Seeing a Facebook video of innocent migrants and refugees who have been abused and tortured is deeply concerning,” said Mohammed Abdiker, IOM Director of Operations and Emergencies, after learning of the situation. “IOM condemns the way that criminal gangs use social media in their shocking abuse of people held against their will and to extort money from their families back home.”

Abdiker added: “This is a global problem where a smuggler or a criminal gang can easily use digital platforms to advertise their services, entice vulnerable people on the move and then exploit them and their families. It is high time that social media and tech companies recognize the extreme harm that is occurring because of their failure to monitor and react to situations of grave human rights abuses – leading ultimately to murder – that are being shared through their channels.”

Leonard Doyle, chief spokesperson for IOM in Geneva, said: “Social media, including Facebook, has a duty to better police content on its channels. It’s not a new argument and we are not accusing Facebook of complicity in murder. Rather we are saying that these channels are being abused by criminals.”