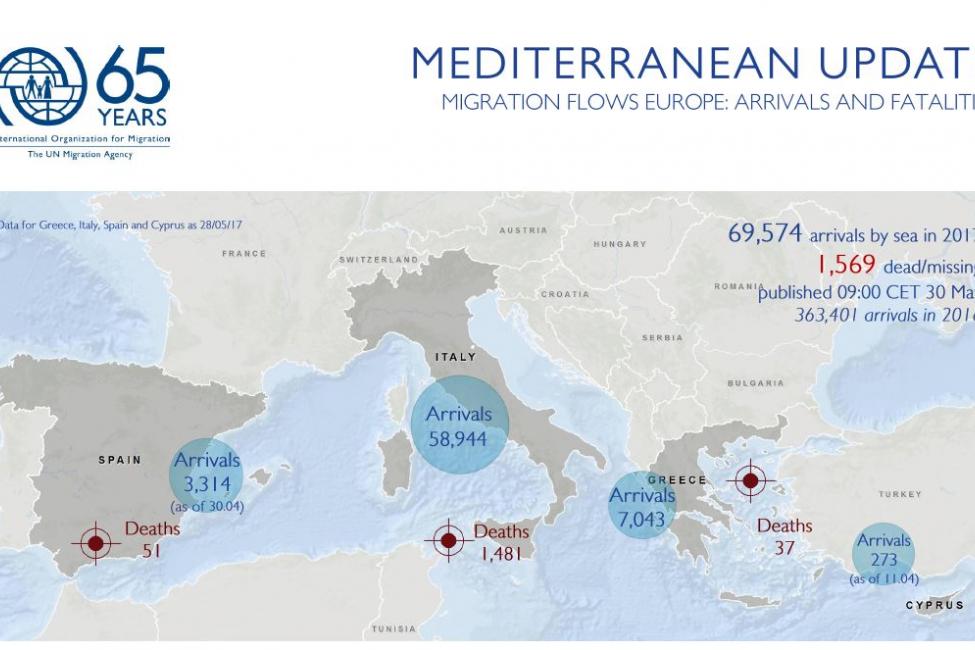 Switzerland - IOM, the UN Migration Agency, reports that 69,574 migrants and refugees entered Europe by sea in 2017 through 28 May, with over 80 per cent arriving in Italy and the remainder arriving in Greece, Cyprus and Spain. This compares with 198,346 arrivals across the region through 28 May 2016.

IOM Rome reported that, through 28 May this year, 58,944 migrants or refugees have landed in Italy. (See chart below). IOM Rome spokesperson Flavio Di Giacomo reported Monday that more than 250 migrants were rescued over the weekend. Operations are still underway. Also on Monday, 29 May, Di Giacomo confirmed that seven corpses were brought to Palermo after being retrieved in recent rescue operations. He said survivors taken to Pozzallo reported at least one recent incident that resulted in 20 drownings.

IOM Libya’s Christine Petré reported that on Monday, 29 May, a total of 2,845 migrants were rescued at sea off Libya during the 10-day period beginning 18 May, in 11 different rescue operations off the Western Libyan coastal cities of Az Zawiyah, Zuwara and Tripoli.

Eight rescue operations have taken place off Az Zawiyah, with 1,773 people (1,578 men, 143 women and 52 children) being rescued. All migrants have been taken to Shuhada al Nasr detention centre. IOM staff visited the centre and warned that further support is needed as the detention centre remains heavily overpopulated. IOM has recognized the need for humanitarian assistance including the provision of non-food aid and is assessing an emergency response including psychosocial first aid.

“Usually the migrants who are rescued are found in a very fragile and vulnerable state of mind,” explained IOM Libya’s Samer Daw. “They build their dreams on going to Europe and when these dreams are shattered, they are left in a terrible situation. Therefore, the psychosocial support activities are a good way for them to relieve some of their stress.”

On 26 May, 571 migrants – including 508 men, 55 women and eight children – were rescued in waters off Tripoli, Libya’s capital. Four of the women were pregnant. IOM’s implementing partner assisted the migrants at the disembarkation point with first aid assistance, primarily burn injuries. Two migrants were also transferred to a health clinic for treatment of skin burns.

During the afternoon of 26 May, 381 migrants (including 53 women and 15 children) were rescued off Zuwara. The boat departed from Subratah with the majority of the migrants coming from Nigeria.

IOM Libya also reported Monday (29 May) that through almost five months into 2017, IOM Libya has assisted 4,030 stranded migrants to return home from Libya through its voluntary humanitarian return (VHR) programme.

The latest return was last Thursday (25 May), when IOM helped 165 stranded migrants – 145 men and 20 women – return home to Nigeria. Among the passengers were three unaccompanied children and two female medical cases.

Also on 25 May, two stranded Ethiopian migrants were also able to return home on commercial flights.

Two days earlier, on 23 May, IOM helped 171 stranded migrants – 166 men and five women – return home to The Gambia from Libya. Among the female passengers were an infant and a child; 133 of the migrants had been in Gharyan Al Hamra detention centre. The remaining 38 migrants previously lived in urban areas.

The charter flights, which departed from Tripoli’s Mitiga airport, were coordinated with the Libyan authorities, the Embassies of The Gambia and Nigeria respectively, as well as IOM colleagues in the receiving countries.

IOM Athens said yesterday (29 May) that Greek authorities reported new arrivals of 376 migrants and refugees between Thursday (25 May) and Sunday (28 May). Since 1 January, a total of 6,043 sea-borne arrivals of irregular migrants have been reported at various Greek islands.

Worldwide, the IOM Missing Migrants Project (MMP) reports that there have been 2,166 fatalities through 28 May (see chart below) with the Mediterranean region accounting for the largest proportion of deaths – about two thirds of the global total.

Since last Friday, MMP has recorded 34 deaths in the Central Mediterranean and also added this year’s first migrant death in East Asia of a 38-year-old Bangladeshi man who died trying to enter Hong Kong. MMP notes that, a year ago (25–26 May, 2016), over 800 people drowned in the Central Med, one reason for the great disparity in year-on-year figures reported this week.