The Council shall meet in regular session once a year, at such time as shall be determined by it.

The Council shall meet in special session at the request of:

The Director General shall notify the members of the date of the first meeting of each session. Such notifications shall be sent:

At the beginning of each session, and after the election of officers, the Council shall adopt its agenda for the session.

In the case of a special session, priority shall be given to those items on the provisional agenda which have occasioned the session.

The Council may revise the agenda while in session.

A formal communication from a Member State to the Director General announcing the names of its representatives and any alternates and advisers shall be deemed sufficient credentials. The Director General shall examine the credentials and report to the Council at the beginning of each session.

The Chairman may, at his discretion, authorize observers to take part in the debates and he may impose such limitations upon their interventions as he deems necessary for the orderly conduct of business. No observer shall have the right to vote.

At the beginning of each regular session, the Council shall elect its Bureau, from among the representatives, which comprises the following officers: a Chairman, a First Vice-Chairman, a Second Vice-Chairman and a Rapporteur.

The officers shall be elected for a one-year term and shall hold office until their successors are elected. They shall be eligible for re-election.

If the Chairman is absent from a meeting or any part thereof, the First Vice-Chairman or, in the latter’s absence, the Second Vice-Chairman shall preside.

A Vice-Chairman acting as Chairman shall have the same duties and powers as the Chairman.

When the representative of a Member State is for the time being the Chairman of the Council, he may authorize an alternate to participate in the proceedings and to vote in the Council. In such case, the Chairman shall not exercise his right to vote.

The Council may set up such subcommittees as may be required for the proper discharge of its functions and refer to them any questions on the agenda for study and report. The terms of reference of subcommittees shall be established by the Council at the time of their being set up.

The Director General shall be present, or be represented by the Deputy Director General or another official designated by him, at all sessions of the Council and any subcommittees. He or his representative may participate in the discussions but shall have no vote.

The Director General shall provide and direct the Secretariat required by the Council and any subcommittees. He shall be responsible for the necessary arrangements for all meetings.

English, French and Spanish shall be the official languages of the Council.

All documents of the Council and any subcommittees shall be made available in the official languages.

Summary records of each meeting of the Council shall be prepared by the Secretariat, and shall be distributed as soon as possible to all Member States and observers. Such Member States and observers shall inform the Secretariat in writing of any changes they may wish to have made in their statements appearing in the summary records not later than eight days after receipt of the latter. Any disagreement concerning such changes shall be decided by the Chairman.

A majority of the members of the Council shall constitute a quorum.

The Council may limit the time allowed to each speaker and the number of times each member may speak on any question. However, on procedural questions, the Chairman shall limit each intervention to a maximum of five minutes.

During the course of a debate the Chairman may announce the list of speakers and, with the consent of the Council, declare the list closed. However, the Chairman may accord the right of reply to any member if, in his opinion, a speech delivered after he has declared the list closed makes this desirable. When the debate of an item is concluded because there are no other speakers, the Chairman shall declare the debate closed. Such closure shall have the same effect as closure by the consent of the Council.

During the discussion of any matter, a representative may move, or the Chairman may propose, the closure of the debate, whether or not any other representative has signified his wish to speak. If application is made for permission to speak against the closure, it may be accorded to not more than two representatives, after which the motion shall be immediately put to the vote.

During the discussion of any matter, a representative may move, or the Chairman may propose, the suspension or the adjournment of the meeting. No discussion on such motions shall be permitted, and they shall be immediately put to the vote.

Subject to Rule 28, the following motions shall have precedence in the following order over all other proposals or motions before the meeting:

Draft resolutions, and substantive amendments or motions, shall be introduced in writing and handed to the Director General, who shall circulate copies to all representatives and to observers 24 hours before they are discussed and voted upon, unless the Council decides otherwise.

A motion may be withdrawn by its proposer at any time before voting on it has commenced, provided that the motion has not been amended. A motion which has thus been withdrawn may be reintroduced by any member.

Each member of the Council or of any subcommittee shall have one vote.

Subject to the provisions of Rules 40 and 45, voting shall be by show of hands.

If a vote is equally divided on matters other than elections, a second vote shall be taken, preferably at the next meeting, without debate. If this vote also results in equality, the proposal shall be regarded as rejected.

Any of these Rules may be amended by the Council, provided that the proposed amendment be consistent with the Constitution of the Organization.

Any of these Rules may be temporarily suspended by the Council, provided that twenty-four hours’ notice of the proposal for such suspension has been given and that such suspension be consistent with the Constitution of the Organization. The notice may be waived if no member objects. 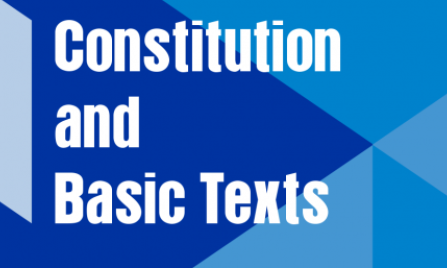 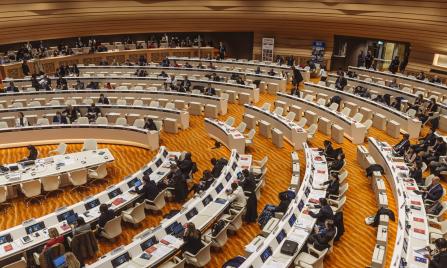 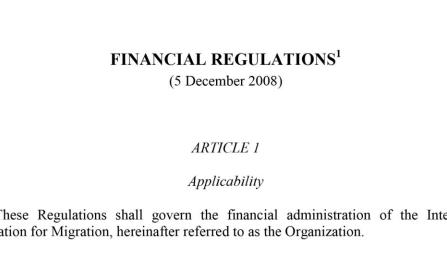